Kevin Jones is a musician and anarchist activist from Belfast. This interview is focused around his most recent song, titled ‘A New War’, which addresses the suicide epidemic in Northern Ireland, and its roots in the conflict. Stream the audio interview, including Kevin’s performance of ‘A New War’, directly from the AnarchistStudies.Blog SoundCloud here (full transcript below, with lyrics).

Kevin’s starting point on this song is the startling statistic that more people have killed themselves in Northern Ireland since the Good Friday Agreement of 1998 than were killed as a result of ‘The Troubles’ conflict. (At least 4500 suicides compared with around 3600 conflict-related deaths during the Troubles (1969-1998). The statistic is based on research by Dr Iris Elliot of the Mental Health Foundation – https://www.mentalhealth.org.uk/blog/northern-ireland-political-stalemate-exacerbating-mental-health-crisis). Kevin brings his musical expression, and anarchist analysis, to bear on the issue in this interview with Jim Donaghey. 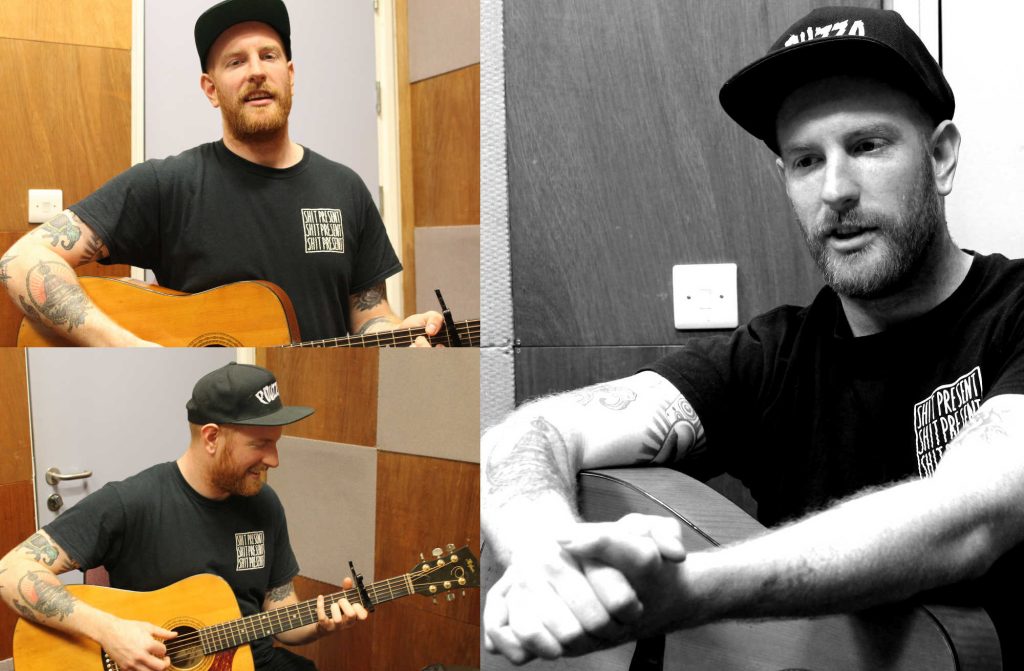 ‘I think all music, all good art, is just a reflection of society. It’s a commentary on what’s going on. There’s not a day goes by in my life where I don’t listen to music, it’s such a powerful tool to invoke emotion in people, y’know? You hear one simple melody and it can change your whole mood, and I would hope that by opening up conversations about these things, hopefully it opens discussions about it, and anything that opens a discussion about something is a positive thing. You’re not gonna change the world with a song, but hopefully you’re part-and-parcel of a wider movement and at the very least you’re opening up a conversation.

The song is called ‘A New War’ and it’s written about the epidemic of suicide in Northern Ireland. And that’s something that has affected me directly with losing a number of friends to suicide and some distant family members, and I think I wrote, the first verse is, ‘show is over you can hide behind the curtain, a little respite from the day that you’ve been cursin’. Take the edge off, but those demons they’re alurkin. You try and hide it, but I know you must be hurtin’. I think it’s really about depression and people that put on a mask in their daily lives. They go to work, ‘the show is over you can hide behind the curtain’, the day is done, you get home, you can be yourself, you’re either by yourself or you’re with your family, and to some extent you can stop the charade of pretending like everything’s OK. And I think that’s a big problem with depression, and a big problem with mental health, that people hide it. And I suppose the analogy of ‘the show is over’ is probably in relation to me, sometimes I’ve struggled with depression, and I think that being in a band and putting all your energy into that, there’s an element of escapism from the real, trying to hide from the real issues in your life that you don’t wanna tackle, y’know?

The second verse then so it’s, ‘never feelin’ like you’re getting’ any better, mind’s just racin’ from one thing to another. They say that talkin’ helps, but they don’t really bother. Just take this paper and queue right at the counter’. It’s essentially, GPs, for whatever reasons, not necessarily through fault of their own, because of lack of resources, instead of people with mental health problems, serious depression, getting to talk to the health professionals that they need to talk to, to be properly diagnosed and treated, they’re getting palmed off with a prescription. I think that’s a frustration of loads of people here, and the resources just aren’t there, the money isn’t there and that’s why the suicide rate is so shockingly high here.

There’s definitely a relation between the legacy of the conflict and the problem with depression and suicide in Northern Ireland. The fact of the matter is we are in a post-conflict society where people, I’m nearly 32 years old, and I had direct experience of the conflict, there are people of the generation and the generation or two older than me that had horrific experiences of the conflict, and definitely have PTSD. My own family, my parents, had horrific experiences during the conflict and their generation never talked about mental health, they still don’t talk about mental health. And without a shadow of a doubt, that generation that lived through the worst of it, in the ‘70s and ‘80s and early ‘90s, they’ve passed down that trauma to their children. 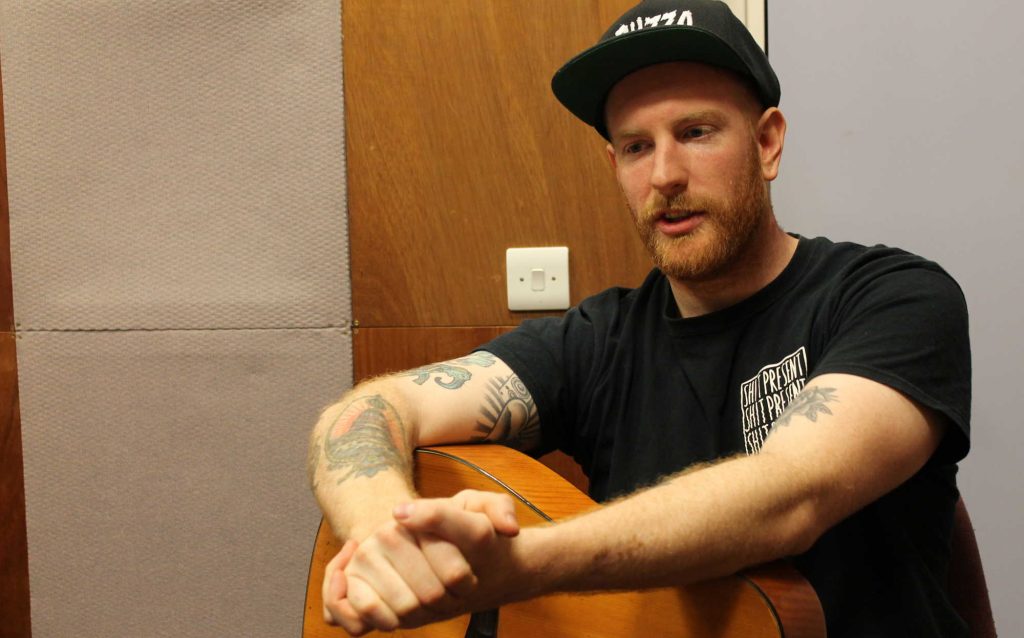 And it’s always predominantly in the working class communities, they were the communities worst affected by the conflict. So those traumas are, I think, are passed down between generation to generation, and they’re not addressed, and we live in a post-conflict society that hasn’t addressed the conflict. We’re still struggling to come to terms and understand what happened, as a society, as people, we’ve never really analysed it. There’s so many dark secrets still to emerge from the Troubles and, ‘the Troubles’ I hate that term, I actually try actively not to use it. It was a conflict, it was a war. It wasn’t ‘the Troubles’, it wasn’t this thing that you can just brush over. A very Irish thing to call it ‘the Troubles’, ‘the wee Troubles’. It was a bloody, brutal conflict and it affected thousands of people – it’s still affecting people. The fact that more people have committed suicide since the Good Friday Agreement, ‘97, ‘98, than actually died within the Troubles, it’s an astounding figure, and when I saw that figure and read a bit about it just astounded me. And it was clear that the legacy of the conflict is still a huge problem for young people here, even people born well after it happened. Because the fact of the matter is that we have a fragile peace, and sectarianism is still a very real thing on a day-to-day basis.

The line in the song, there’s two lines, ‘their war is over and they say we’re movin’ forward. We inherited a new one and no-one seems to notice’. That’s a reference to the suicide rate. So, what is violence? Violence results in the physical harm of human beings or of people, it’s one of the many loose definitions of violence I suppose. People being murdered, people being blown up, people being shot and attacked by other people during the conflict, that’s violence. But people taking their own lives is also violence, so when I talk about a war, a new war, I see the suicide epidemic here as a failing by the state. And they have a duty of care to people here, we’re still in the United Kingdom, and I feel like we get ignored and marginalised here. The rest of the UK had to learn about what was going on here, because the DUP’s in a coalition with the Tories and because of the border talk, but before that nobody really gave a shit about us, and I feel like the British state has never really given a shit about us. And I feel like, essentially, the suicide epidemic, the state have created a space for that, those problems to grow in our society, and that to me is violence, that’s a war. The state waging a war on people essentially. It sounds dramatic, and it’s [a] fairly radical way of thinking about it, but why is it any different? Actions of human beings that result in the death of other human beings, and there’s direct responsibility there. If the state is failing its people, its duty of care to its people, then they’re partly responsible for the suicide epidemic. Whether it’s because of the legacy of the conflict, which the state played a big role in, or whether it’s just a current issue of not dealing with it, austerity, cutting funding to mental health – and that to me is a war. If that’s not a war, I don’t know what is. The fact of the matter is they don’t care. They don’t care about us, they don’t care about poor depressed people taking their lives. People at the upper echelons of political society, they live in a different world, the Tory party, the elite, they don’t, they just don’t care. And that to me is a crime, an absolute crime.

I mean, the chorus is just a bit of, it changes, ‘maybe we’re doomed, maybe we’re fucked’ – that’s probably just my nihilist tendencies. The last chorus changes then to, ‘I don’t think we’re doomed yeah, I don’t think we’re fucked. If we stick together we can force a change in luck. Tomorrow’s ours if we can only waken up. Don’t think we’re doomed, yeah, I don’t think we’re fucked’. So that’s a more positive outlook, because you can’t just critique things like this and say ‘we’re fucked’ – I do feel like that a lot, and I think a lot of people do, and that’s aspects of nihilism and our comic pessimism here that we always have. But at the end of the day, these things can change and I suppose they’re fairly clichéd, basic lines, but sometimes that’s what you need in a song, to be direct. A lot of the problem is the failure of the state, and we can change that with grassroots work and community work, and there are a lot of, on the ground, a lot of suicide prevention, small charities and community groups, all trying to offer people options outside of the NHS, because the support’s not there, to try and create a wider, greater support network. Problems can be fixed, they’re not, it’s not an impossible task to fix, to reduce, to drastically reduce the suicide rate in a place like this’. 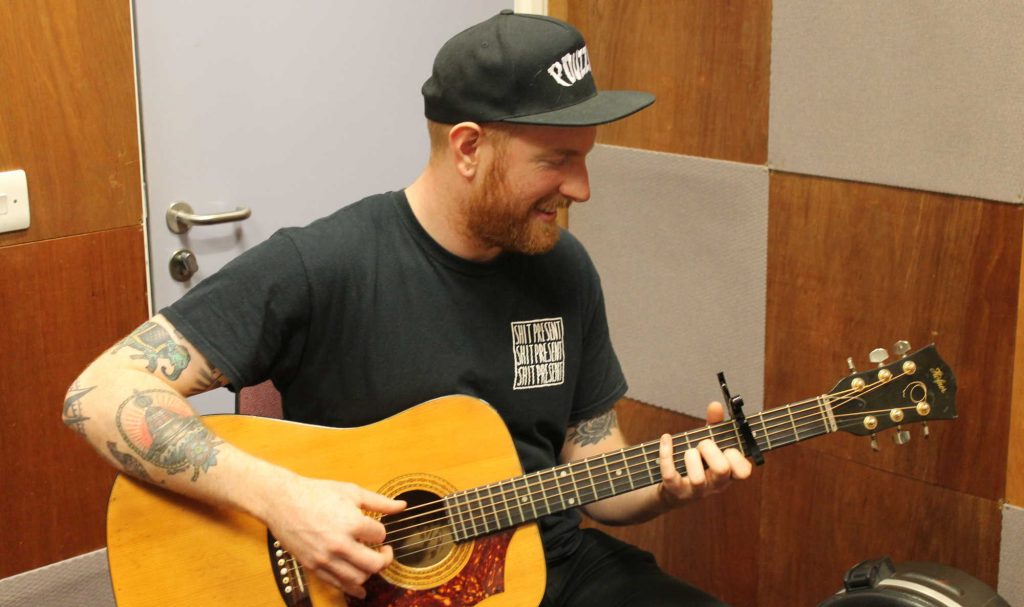 Show is over, you can hide behind the curtain.

A little respite from the day that you’ve been cursin’.

Take the edge off but those demons they’re alurkin’.

You try and hide it, but I know you must be hurtin’.

Your mind’s just racin’ from one thing to another.

They say that talkin’ helps, but they don’t really bother.

Just take this paper and queue right at the counter.

Gonna find a little hidin’ place and just give up.

Sick of wishin’ for a change in luck.

Their war is over, yeah, they say we’re movin’ forward.

We inherited a new one, but no one seemed to notice.

The enemy, so universal. It treats us all the same.

Everyone knows someone, everyone can name a name.

If we stick together we could force a change in luck.

Tomorrow’s ours if we could only waken up.

[The interview and session is an outcome of the ‘Sounding Conflict: from resistance to reconciliation’ research project at Queen’s University Belfast – visit www.soundingconflict.org for more information and to listen to other interview sessions with local musicians.]