Almost a year ago, writing for this blog, I argued that the mutual aid networks that emerged around the world in response to Covid-19 could be understood through an anarchist engagement with Stafford Beer’s organisational cybernetics. Here I want to look back over the last year and again apply the lens of Beer’s Viable System Model (VSM) to assess the threats posed to effective mutual aid self-organisation. 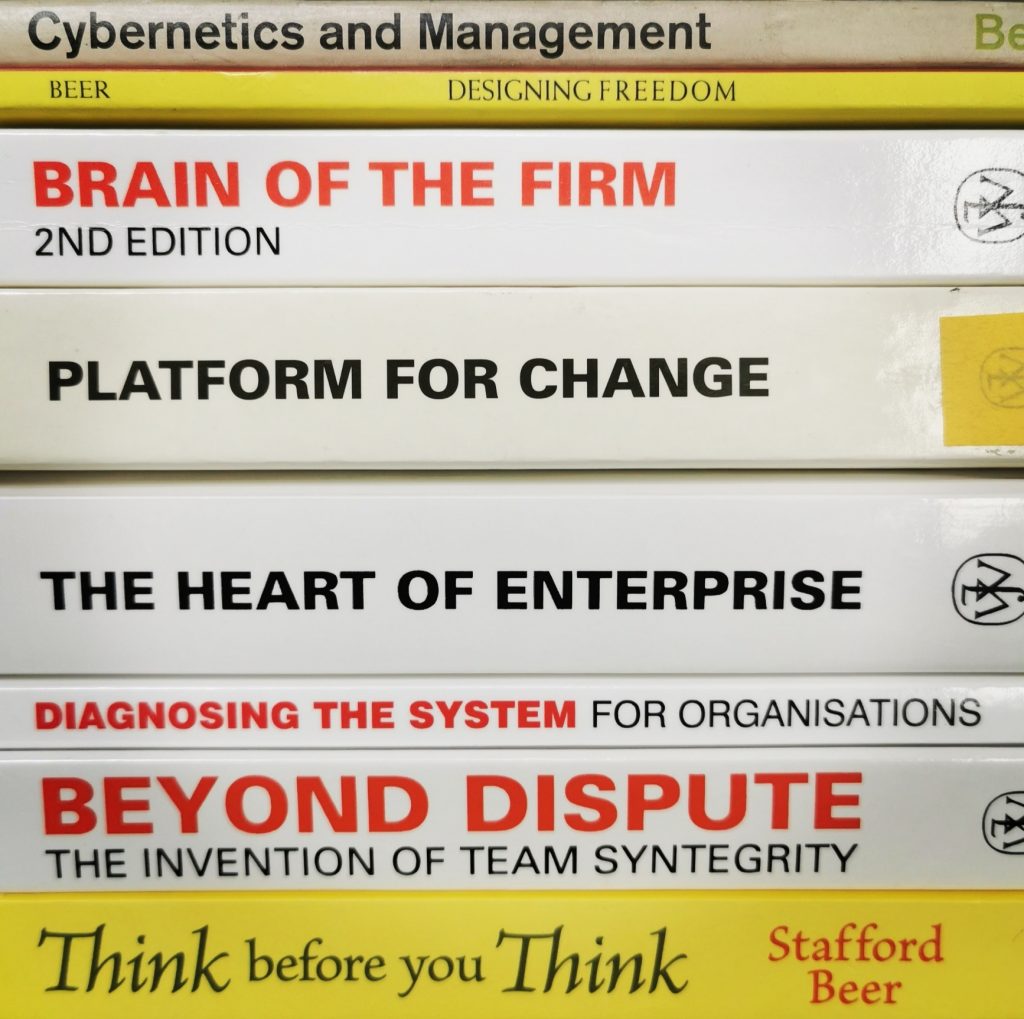 I don’t want to repeat the discussion in my earlier article, so for an introduction to Beer’s work and how it might apply to mutual aid and other forms of anarchist organisation, please have a look at that earlier piece, available here. Jeremy Gross has provided a more in-depth exploration of Beer’s life and work and its relevance for radical politics. Others have applied Beer’s thinking to the current crisis (for example, here, here and here) while cybernetics comes under criticism in the Covid-19 context by John Preston and Rhiannon Firth. In this article I offer a specifically anarchist assessment, but one that draws on the VSM as it was intended, as a diagnostic tool.

At the beginning of the pandemic, there was hope that mutual aid groups might extend beyond Covid and form a part of how we imagine and build a new society in the shell of the old. One year on, where do we stand?

Early in this crisis, anarchists recognised the threat posed by a charity dynamic in mutual aid, covering issues such as the moralising around discourses of deserving and underserving groups and individuals as well as the development of dynamics of giver and receiver, which create a hierarchical separation that reinforces dependency and a denial of agency.

From a cybernetics perspective, the charity model creeping into mutual aid organising has another effect: it makes mutual aid groups fundamentally less effective in their capacity to act and adapt quickly. Organisations are at their most effective when there is a high level of autonomy in the parts of the organisation. People involved in the day-to-day life of their street or neighbourhood, for example, will be better placed to know what help is needed and where.

The imposition of top-down command either through local government control or, as was the case in the network I was active in, someone with professional experience in NGO management putting themselves in a coordinator role, reduces the effectiveness of the system. Decision making and the allocation of resources become inaccurate as they are removed from the people on the ground doing the actual work of mutual aid. Systems also become incapable of fast response. Communication becomes inefficient as bottlenecks are created that often end up putting undue amounts of pressure on specific individuals, leading to the risk of burnout and the breakdown of the network if key organisational knowledge is lost.

Decentralisation can work effectively only when decision making, resources and knowledge are situated where they are needed most, based on the principle of subsidiarity. A federal element can come into play, with mutual aid groups collaborating with one another, but only in the service of these autonomous groups, for example through sharing information or guaranteeing that resources are shifted from richer to poorer mutual aid groups.

Some of the core functions identified by Beer’s VSM are the ability for the organisation to review or audit its own activities for coherence with its overall aims and to look outside itself and to the future to enable effective planning. An anarchist articulation of these functions would demand that they be subject to democratic participation (something I discuss in my previous article as the distinction between structural and functional hierarchy in the VSM).

The charity model of organising works against this, with select groups taking on these roles, perhaps in absence of any involvement in core mutual aid activities. Again, this leads to a decrease in effectiveness as decisions will lack the information and insight available to the people active on the ground.

The anarchist argument here is not that these functions should not be happening. In the network I was involved in, the success of a policy applied to all groups in the network was the exclusion of an individual with past ties to racist and Islamophobic activities who had attempted to set themselves up as a local mutual aid coordinator. The point here is that such functions will be at their best when they are integrated into participatory and democratic mechanisms rather than the purview of a small group of coordinators.

In mutual aid organising, communication via the internet and phones became the norm due to the necessity of restrictions on face-to-face contact. Something that was again noted early on in this current wave of mutual aid organising was the heavy reliance on an often very complex communication infrastructure, ranging from relatively new internet platforms to more traditional methods. This crisis is perhaps the first time self-organisation has had to fall back on digital communication to such an extent.

Communication is crucial to the VSM’s understanding of effective self-organisation. The new communication infrastructures of mutual aid networks create an array of problems in this regard, including but not limited to the sheer volume of information, juggling information coming via multiple channels at once, negotiating the priority of messages and ensuring that everyone involved is able to feed into decision making.

Distributed, decentralised forms of organisation may be better placed to deal with this complexity than top-down structures like the charity model of management (indeed, the VSM was specifically designed with adaptability to complex environments in mind). Nonetheless, there are some basic questions of cognitive capacity and information overload – for individuals and groups – that need to be addressed.

The reliance on a complex and taxing communication infrastructure also creates a structural bias in favour of people who have prior experience of working with these kinds of platforms, either in their professional lives or in activist or voluntary contexts. Analysis of the membership of mutual aid groups in the UK has suggested that 76% of participants work in managerial, administrative and professional occupations, pointing towards barriers that make equal participation far from accessible.

This converges with the threats present in the tendency towards charity dynamics, where individuals with specific skill sets and socio-economic backgrounds are potentially playing higher roles in emerging structural hierarchies. Part of guaranteeing as much as possible that mutual aid is effectively self-organised needs to be finding accessible channels of communication that allow everyone involved to participate in the way they want.

While we can point to structural hierarchies or dysfunctional communication channels, viable systems are also embedded in an environment of conditions which also play an important role in the realisation of self-organisation.

In an article I wrote with my colleague Ruth Kinna in March last year, we concluded as follows: “If business-as-usual austerity returns after the crisis, the fertile ground of mutual aid may well dry up. The maintenance and extension of basic income, in contrast, may help preserve and promote grassroots social change in the longer term”.

Formal mutual aid groups in areas least impacted by austerity have often been the most effective. This is not to say that there aren’t exceptions, nor that mutual aid isn’t happening when it isn’t labelled as such, but economic conditions that increase financial burdens and stress, and that worsen mental health crises while removing much-needed support, may make participation in activities like mutual aid more difficult than for people in advantaged socio-economic areas.

Perhaps unsurprising given mutual aid’s focus on reproductive labour, some research has suggested that mutual aid group members are predominantly women. A gendered-division of labour being reproduced in mutual aid organising is surely a systemic condition anarchists need to challenge for these groups to be effective long-term without further entrenching inequalities.

For a variety of reasons, there are areas in any town or city that have strong social bonds, a sense of collective identity, where people tend to know and trust one another. There is also the converse: areas where people have little or no contact with neighbours and where there is no identification with place or community.

In my experience of being involved in mutual aid organising, I saw this present itself quite starkly. There were the areas of the city that were quickly identifiable as this or that neighbourhood, with a sense of community that was reflected in high involvement in mutual aid groups, while engagement was significantly lower elsewhere.

Existing bonds of trust and sociality in communities may be a precondition for effective mutual aid, and possibly one that anarchists and other radicals can exert some control over through community organising campaigns. Vital to this is a discussion about where to draw the boundaries of what counts as our community – a local government council ward, with its artificially imposed borders, or something more organic that makes more immediate sense to people?

The existing resources a mutual aid group might have at its disposal include infrastructures in the form of physical storage space, transport, communication, time and finances, as well as individual and collective experience.

Whether a mutual aid group has access to things like printing facilities to produce flyers and posters or transport to deliver shopping or other necessities to people will play a role in how effectively they can operate. With furlough playing a role in the current situation, people’s time and availability has also been a clear condition for effectiveness, with many groups dissolving after the first lockdown when people returned to work.

Again, this is something we can actually do something about, by working to build experience and resources in our communities.

In identifying these challenges to effective mutual aid organising, my aim here is to provide an analysis – based on an application of Stafford Beer’s Viable System Model – that can be of use in developing mutual aid groups beyond the present crisis.

While the necessity imposed by Covid-19 may pass, there are potentially far worse crises on the horizon. If anarchism is to play a role in the future, as I’m sure those reading this blog think it should and indeed must, then we need to be able to seriously assess the strengths and weaknesses of self-organisation. The scale of mutual aid organising over the last twelve months has given us that opportunity. Approaches to effective self-organisation like Beer’s cybernetics can be a part of a collective learning. We need participatory and democratic self-organisation to work. We need it to be the most effective way of responding to the looming crises, not only allowing us to survive but to achieve real freedom, to build a better future beyond the hurt we know is coming.