Invisible, by Andrew Fraser (Freedom Press 2019), is a “diary of rough sleeping in Britain”. But it is so much more than that. It is a touching, heartfelt, genuine story and it is a scathing, seething, furious indictment of the housing crisis, of needless homelessness, of the callous, cruel, inhumane and downright evil Tory government and its policies. The book is an account of Fraser’s life on the streets. It is also a collage containing news stories, reports, and accounts of the different policies, repressions, and resistances to them that have sprung up over the past few years across the UK. From the creation of squats and occupations from Bristol to Manchester that attempt to create a space for solidarity, housing, and support, to the aggressive, repressive policies of the government in terms of the way they treat homeless people and use charities as a front to deport people who turn to them for help – the book offers a portrait of a Britain undergoing a quiet civil war. A war between us and them.

Because the main thrust of Invisible argues that it really is us versus them. Time and again Fraser’s story is peppered with accounts of human kindness and solidarity. From friendly jokes and sharing dog-ends of cigarettes, to people looking out for each other, standing up for each other and hurting for each other – the words “love” and “friendship” are countless in mention. This is the us. On the other side there are accounts of people who shout at him and his friends in a deliberate attempt to make them suffer and feel shame, and there are insights into the hidden mechanics of the bureaucratic machine that is designed to keep people homeless, desperate, hopeless.

Fraser is no people’s hero. He is politically informed and engaged and to some might seem as an example of the “good homeless person”, the “deserving poor”. Let’s make it clear – there is no-one who does not deserve a home. Yes, some homeless people aren’t very nice. Some (most) billionaires aren’t very nice. There are good and bad people at every level of society. We can recognise this without falling back into excusing the mistreatment of people on the basis of their economic status. Creating a distinction between the good and the bad, the deserving and the undeserving, plays right into the hands of those who seek to keep us divided. Again, it must be us versus them. For Fraser to be celebrated as one of the “good” homeless people would only serve to support those who want to make it harder for the “bad”. And as Fraser illustrates in his account, he is no angel. He can shout and scream and cry at the injustices and at heartless individuals just as well as he can accurately document the specific mechanisms of the welfare system and of inhumane measures to make homeless people’s lives miserable. (His frequent refrain against the anti-homeless beeping alarms outside Marks & Spencer is just one illustration of the many strategies designed to keep people down).

This winter, like every winter of the last few years, the news will be dominated with stories about the “homelessness crisis” in the UK. From the Guardian to the Times they will lament the conditions of the poor, suffering homeless people in Britain and say how something must be done. At the same time there currently stand over 200,000 empty homes across the country. One of the strengths of the book is to implicitly relate Fraser’s story to those of squats and occupations across the country. This serves to illustrate: there can be an answer. The relationship between squatting and homelessness, and squatters and homeless people, is a complicated one but serves as a possibility of a way out. There is no sense in empty homes and homeless people. None. And by relating stories of squats getting violently evicted and people turfed onto the street with Fraser’s quest to find somewhere safe and secure to live, Invisible highlights the absurd cruelty of homelessness policies, and the individuals who enforce them.

Don’t romanticise Fraser or his story. He is not always “right on”, but he is honest. If you are looking for Saint Homeless, this ain’t him. But it is rare that the people who are directly affected by these situations are given a platform to speak for themselves. Instead of being talked about, Fraser’s story lets him speak for himself. His honesty, emotion, and matter of fact approach to topics such as addiction, fear, hunger, and death is refreshing, but rather than inspire sympathy it should inspire anger. And, as the accounts of actions to fight the housing crisis and homelessness illustrate, anger and love and friendship and solidarity can and should inspire action. We should cry. But once we are done crying we should dry our eyes, pick up a crowbar, and get to work. 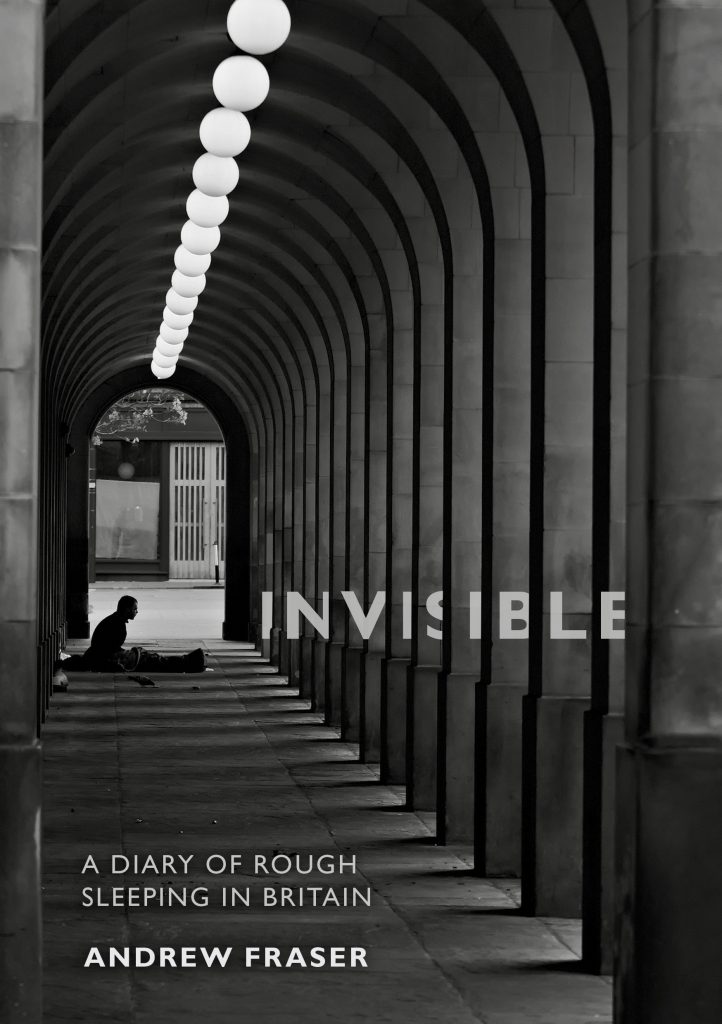 [Invisible: Diary of a Rough Sleeper by Andrew Fraser is available directly from Freedom Books: https://freedompress.org.uk/product/invisible-diary-of-a-rough-sleeper-2/]