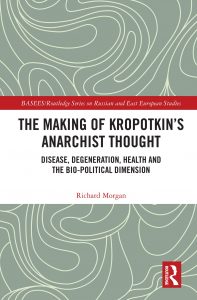 When I learned from the publisher the word limit for my new book, The Making of Kropotkin’s Anarchist Thought: Disease, Degeneration, Health and the Bio-political Dimension, I immediately scrapped what was then Chapter 3. Chapter 4 became Chapter 3, 5 became 4, and so on. This unwriting was probably the most enjoyable part of the writing process (‘select all’, ‘delete’, ‘save’). And while it took the word count down within limits, my act of deletion, I think, also had a beneficial impact on the overall whole of the work. Yes, I had conformed to the demands of the publisher, but in so doing I had also performed an act of intervention for the sake of the greater good.

And in this book’s phantom Chapter 3, I had been thinking about some of the ways Kropotkin imagined improving entire wholes through notions of intervention. In particular, I had explored his view of science’s intervention into social life, for the sake of its improvement, as a form of social gardening.

I’d decided to pursue this idea upon reading the below quotation from Fields, Factories and Workshops (1899), where Kropotkin describes a new relationship of science to plants in a chapter entitled ‘The Possibilities of Agriculture’:

New horizons are continually unveiled. For the last fifty years science – especially chemistry – and mechanical skill have been widening and extending the industrial powers of man upon organic and inorganic dead matter. Prodigies have been achieved in that direction. Now comes the turn of similar achievements with living plants. Human skill in the treatment of living matter, and science – in its branch dealing with living organisms – step in with the intention of doing for the art of food-growing what mechanical and chemical skill have done in the art of fashioning and shaping metals, wood and dead fibres of plants. Almost every year brings some new, often unexpected improvement (1899, p. 91).

What I’d read in this passage was Kropotkin’s celebration of a new step in science’s conquest over nature: science had progressed from wielding its power over dead matter to affecting living entities. And what captivated Kropotkin most about developments in agriculture, I thought, was the apparent ease with which science could modify life. The description of this effect was one of intervention, a form of interference whereby science ‘steps in’ with the intention of causing a change in nature. Kropotkin marvels at how, in the hands of humanity, science’s intervention into nature was a ‘treatment’ of life. The application of science was a form of ‘art’, he wrote, a way of ‘fashioning’ living things: the shaping of nature in order to improve it.

I wasn’t surprised to find that Kropotkin’s celebration of horticultural intervention – science stepping in, treating, and tending to the life of a whole – wasn’t limited to that of plants in a garden. He thought that politics and social science should occupy a similar position in their relation to society: they ‘must take, with regard to human societies, a position analogous to that which is occupied by Physiology with regard to plants and animals’ (1901, p. 78). Just as the physiologist moves from an analysis of a plant to an attempt to refashion and shape its life, politics must, after scientifically understanding and describing society, ‘step in’ and transform it.

I wanted to make the point, in this chapter that never was, that Kropotkin’s view of the relationship of politics to society as being analogous to that of the physiologist to plant life was an apt metaphorical conception. Indeed, Zygmunt Bauman finds the metaphor of gardening useful in explorations and explanations of modernity, of which Kropotkin’s scientific anarchism is but one fascinating trajectory. He describes the coming of modernity as ‘a process of transformation of wild cultures into garden cultures’ (1995, p. 51). The role of politics, he argues, increasingly took on the responsibility of the gardener to their garden, who continually tends, treats, and shapes a natural, though artificially constructed and intentionally ordered environment according to their instrumental and aesthetic views. The life of the garden is part of nature, but the conditions, limits, and purpose of its existence have been externally imposed and prescribed by the scientific norms of horticulture.

James C. Scott considers the project of the gardener as ‘an appropriate parallel’ to nineteenth-century visions of sweeping social transformation (1998, p. 92). The belief of the gardener that their technologies, tools, and botanical knowledge will maintain and improve garden life is illustrative of political designs for society. Gardeners not only have the task of administering life, through correct watering, choice of soils and composts, and allowance of light, but also bear the responsibility of taming its latent wildness. The gardener must prune, cut, and weed out recalcitrant elements. Though levelled at individuals, their intervention always has as its main priority the health and beauty of the whole garden. As a nineteenth-century social gardener, Kropotkin’s notion of a ‘physiology of society’, I thought, with its faith in the power of biological science to understand, satisfy, and keep abreast of the economies of social life, reflected Scott’s observations:

We may define this science as: The study of the needs of mankind, and the means of satisfying them […]. Its true name should be physiology of society. It constitutes a parallel science to the physiology of plants and animals, which is the study of the needs of plants and animals, and of the most advantageous ways of satisfying them. In the series of sociological sciences, the economy of human societies takes the place occupied in the series of biological sciences by the physiology of organic bodies (1995, p. 159).

And Kropotkin was far from unique in thinking about transformative politics as a form of social gardening. In ‘Evolution and Ethics: Prolegomena’ (1894), for example, Thomas H. Huxley described the politics of modernity as a ‘horticultural process’ (1894, p. 11). By ‘the intervention of man’, wild nature – including human nature and the life of societies – was being ‘made into a garden’ (ibid., p. 9). Like Kropotkin, Huxley recognised that the key characteristic of horticultural politics is that of establishing the conditions in which the life of the garden grows: ‘The tendency of the horticultural process is the adjustment of the conditions to the needs of the forms of plant life which the gardener desires to raise’ (ibid., p. 13).

In his emphasis on the responsibility of politics to adjust and arrange the conditions of society most favourable to the life of individuals, Huxley shared the same concern later put forward by Kropotkin: the primary object of politics is a conception of society itself, understood as a set of conditions, parameters, limits, and allowances in which the life of a certain type of person will develop. Huxley reiterates the point: ‘The gardener […] attempts to modify the conditions, in such a manner as to bring about the survival of those forms which most nearly approach the standard of the useful, or the beautiful, which he has in mind’ (ibid., p. 14). With the same rationale as the gardener, politics seeks to reach and affect the life of individual organisms by modifying their environment. It hopes to encourage desirable ways of life not in direct contact with individuals, but by intervening in the realm of their existence.

In Kropotkin’s thought, this approach often took the form of addressing social problems – social diseases that required diagnosing and remedying – for the sake of improving the condition of the garden:

We are [able] to undertake the study of the most arduous social questions in exactly the same way as the gardener on the one hand, and the physiologist on the other hand, study the most favourable conditions for the growth of a plant – let us do so! (1901, p. 74).

And this was the main concern in my book’s phantom Chapter 3. Taking Kropotkin’s lead, I considered the metaphor of gardening as a thought-provoking way to think about his conception of the relationship of politics to society. Yet, in the above quotation the gardening metaphor is actually abandoned. No longer is the relationship between gardening and politics considered analogous, but ‘exactly the same’. The ideal relationship between politics and the problems of the social realm – crime, suicide, insanity, disease, degeneration – should not simply be comparable to plant physiology, Kropotkin writes, but identical.