‘The Fordist baggage of anarcho-syndicalism’, by Ben Debney, argues that the high degree of adaptivity of global capitalism in the 20th century gave rise to service industries, the feminization of the workforce, the financialization of economies and immaterial labour/knowledge work. Still, the author argues that anarcho-syndicalism was unable to keep pace with these mutations in the labor sphere. That failure is argued by Debney to be a reflection of anarcho-syndicalism in theory and practice due to (1) an (assumed) Fordist paradigm and (2) a focus on wage exploitation, instead of labor exploitation.

As anarchists we deeply disagree with Ben Debney’s critique. The author criticizes anarcho-syndicalism on the (false) assumption that it is Fordist in essence. His hypothesis is not valid, nor his following arguments. The author does do a good job in highlighting new forms of labor – in this sense, the essay is quite updated in its literature review. However, the critiques of anarcho-syndicalist experiences lack references and empiricism. When there is some evidence of anarchist organizing, it actually advocates against the author’s argument (as with the discussion of Bengali workers and anarchist organizing, for example).

This article takes as a starting point the fact that the Latin world of work, and especially that of Latin America, has never been under a Fordist paradigm; the Latin American context has never really experienced issues associated with heavy industries. In order to test and invalidate Debney’s premise, the article steps back to show anarcho-syndicalism across the 19th and 20th centuries and then demonstrates contemporary experiences in the Brazilian/Latin American context.

In the time of the historical International Workers’ Association (IWA) (1864-1876) there was an intense debate between advocates of centralized organization and advocates of federation. Marx would attack the small social organizations of various urban crafts and services as petty-bourgeois, while Kropotkin, for example, would remind us first of collectivist experiences in the context of French Revolution with associations of tailors, shoemakers and the press. Anarchist syndicalism in Latin America has followed-on from the early anarchist movement’s analyses. For instance, in Argentina anarcho-comunist working women were organizing and publishing their own newspapers in the 1890s: La Voz de la Mujer [The Women’s Voice] (1896-1897). 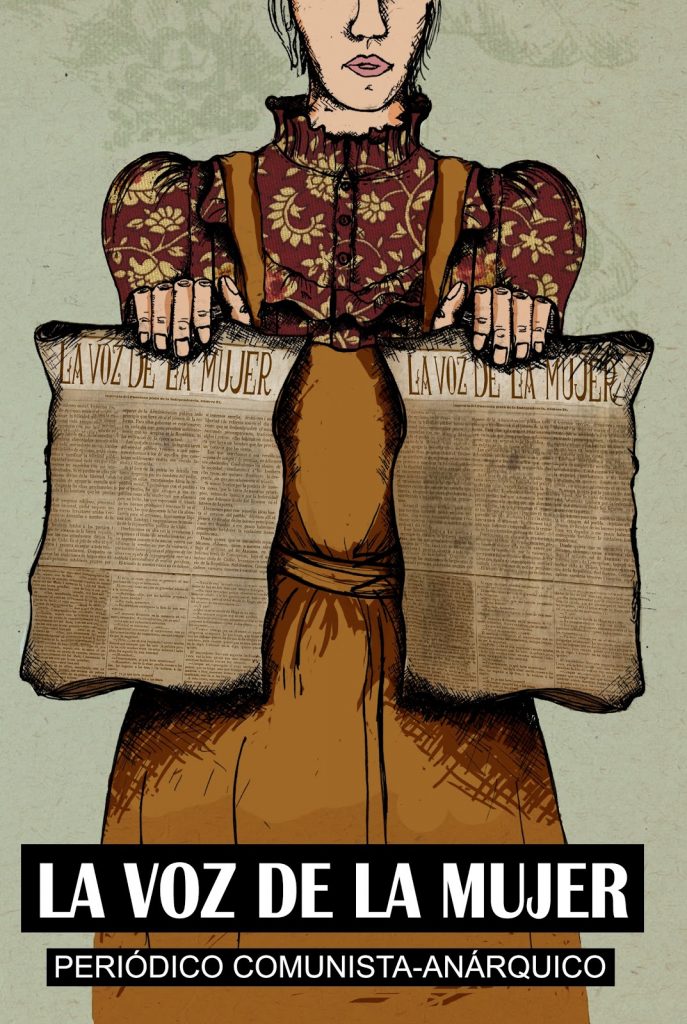 It is important to notice different models of social and economic organization between the Anglo-Germanic and the Latin worlds. The difference is not just cultural – there is a fundamental economic and thus social organizational difference between these worlds. Still, there are some similarities between their revolutionary syndicalisms.

At a time of expanding workers’ organization (which would lead to the new IWA of 1922), a new model of revolutionary syndicalism emerged in the form of the French CGT (Confédération Générale du Travail [General Confederation of Labour]) influenced by James Guillaume, heir to the International, which further inspired the formation of unions in Latin countries and even in Germany and Russia. The exception is the Anglophone world, which kept its own model of hegemonic industry-based unionism (Damier 2009: 14-21). The level of industrialization in Argentina and Brazil between the 1910s and 1930s was low compared to the UK. Still, while acknowledging that Latin American countries are unevenly industrialized (Argentina and Brazil have larger industrial bases than Guatemala and El Salvador), overall and historically Latin American industries are of low added value and technology. Although Latin America was not a favorable environment for Fordist-based unions, anarchists were actively involved in unions in Brazil, Uruguay, and Paraguay (1905-1906), Bolivia (1908, 1912 and 1926), Peru (1912) and Chile (1913) (Zimmer 2019).

Therefore, Latin American syndicalism led by anarchists was mostly organized in the services sector or light industries: a hard-to-imagine situation for traditional Fordist organizing based on wage earnings, rather than labor exploitation. In Argentina, anarchist unions used to organize cabinetmakers, firefighters, hairdressers, peasants, port workers, sailors, blacksmiths, salesmen, drivers, machinists, mechanics, and bakers. Anarchists succeeded in organizing around 25,000 workers as early as 1895, and 40,000 workers in 1902. Emblematic cases of repression, murder and pogroms, such as the Tragic Week (1920) and Rebellious Patagonia (1920-1921), should also be remembered.

In Brazil, the 1917 general strike in São Paulo began in the textile industry and later incorporated civil officers, transportation officials, printers and various other workers in urban sectors. In São Paulo city alone, anarchists were capable of organizing 70,000 workers, with similar uprisings throughout Brazil. Repression over anarchist popular mobilizations through direct action was manifested in exterminations, imprisonments (at Ilha das Cobras) concentration camps (such as Ushuaia and Clevelândia), and laws to deport immigrants.

As anarchist organizing in Latin America was not limited to industrial workers, the political agenda was not limited to wages either. For instance, the issue of ‘carestia de vida’ [‘life scarcity’] was understood by syndicalists as the lack of access to staple resources and the predominance of low salaries, also related to the competition for jobs among men, women and children (Goulart 2013). Improving people’s lives was also related to freedom of association and shorter working hours, which were considered strategically as steps towards revolution. Here, there are similarities to the Haymarket May Day, as revolutionaries also supported the popular will for shorter working hours (Zimmer 2019). Some Brazilian anarcho-revolutionary syndicalists, such as José Oiticica, organized for a general strike in Rio de Janeiro in 1918 (Nébias 2009, Bartz 2014), and connected the advancement of rights to the revolution (Salgado 2012). These political agendas would also be advocated by Edgar Rodrigues (1987) in his later review of a revolutionary syndicalism.

The Brazilian debate was part of a larger historical momentum. The new IWA Congresses, which took place between 1920 and 1922, given the failed experience of the Russian Revolution, began to define anarcho-syndicalism in relation to other anarchist traditions. It’s worth mentioning that the Latin American agenda for working class emancipation beyond economic issues was aligned with some trends in Latin Europe, especially the CNT (Confederación Nacional de Trabajadores [National Confederation of Workers]) in Spain. This process would continue with the founding of the FAI (Federación Anarquista Ibérica [Iberian Anarchist Federation]), in 1927, and up until the Spanish Revolution (1936-1937) (Damier 2009: 64-87)

At this time, a series of strategic anarchist practices under the umbrella of anarcho-syndicalism were playing out in Spain: neighborhood assemblies, community organizations, defense committees and militias (Wetzel 2018). Mujeres Libres (a women’s collective both in dialogue with and in opposition to the CNT) organized more than 30,000 women. Spanish anarcho-syndicalism was also linked to the Modern Schools, designed by Francisco Ferrer, inspired by workers’ self-organization; the Tragic Week of 1909, opposed to colonial action in Morocco; the tenant strikes of 1883, 1905 and 1919; and the 1930 strike involving the CNT with construction workers, neighborhood and tenant communities, and the fight against the cost of living. Again, it’s worth mentioning that well-known CNT and FAI militants were barbers, waiters, teachers, drivers, and even expropriators.

Following a workers’ history aroused by the Haymarket tragedy, syndicalism in the industrialised ‘ABC’ area of Greater São Paulo took as its own origin myth the murder of the young anarchist Constantino Castellani in Santo André’s strike of 1919. União Operária [The Workers’ Union], associated with the Confederação Operária Brasileira (COB [Brazilian Workers’ Confederation]), was created in the context of May Day, in 1918, as an anarchist and revolutionary syndicate. The Workers’ Union had been planned since 1914 by autonomists with proclivities towards direct action (Costa 2019). The League, as that syndicate was also known, followed the Chicago ‘programme’ and covered all professional categories. According to Armando Mazzo, an early anarchist turned communist when reorganizing the Workers Union in 1928, the anarchists gave incendiary speeches that always ended by reaffirming the need to hang all capitalists.  As Natalino Vertematti, another of Castellani’s comrades, testified: ‘We followed the anarchist syndicalism. Or socialism. But I stood in between these times. Anarchism is a philosophy … We intended to educate the masses’ (Costa 2019: 13-36, our translation). 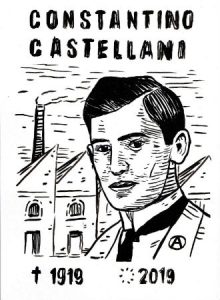 Castellani, a weaver and the League’s General Secretary by the age of 18, was killed by the police during a march intended to convince workers of a joinery to join a strike. After many troubled days, the organizers of the League were arrested, deported or sent to Ilha das Cobras prison, and locked-up for about 10 years. The Workers’ Union was eventually refounded by communists a decade later. After nearly half a century, upon the arrival of the major motor companies in the neighbouring town of São Bernardo do Campo, a new union emerged: the ABC Metallurgists, securing for itself the working force of the large vehicle assembly lines (Fordist, one may say), in breach with the Santo André Workers’ Union. After both unions allied in the nineties, they kept Castellani’s memory, but now dissociated from its anarchist elements. This ‘new unionism’ was driven to conciliation with the bourgeoisie and the State, democratically taking over the Presidency of Brazil in 2002, with the election of their greatest leader, Lula da Silva. As in Brazil, across the American continent anarcho-syndicalism was progressively overthrown by an corporatist/State union model.

This example illustrates how far away from anarcho-syndicalism the Fordist ‘new unionism’ of the late 1970s and 1980s went, considering a local reality of syndicalist history and industrialization – especially in the ABC region – which had been at the frontline of the Brazilian economy and labour politics, affecting the whole country. Now that this populist cycle in Brazil has come to an end, the country faces its highest deindustrialization rates, labor deregulation, the dismantling of social security and so on. Against all this, anarcho-syndicalism has been remembered (Vasco & Crispim 2014, Costa 2019) and reborn with revolutionary syndicalism inside organizations like the Federação das Organizações Sindicalistas Revolucionárias do Brasil (FOB [Brazilian Federation of Syndicalist Revolutionary Organizations]). FOB’s members work largely in the education sector. This refutes the argument that anarcho-syndicalism failed to keep pace due to immaterial work. Still, FOB’s political agenda includes broader struggles, such as racism, patriarchy, colonialism and anti-fascist issues in general. Therefore, either directly or indirectly, FOB includes non-Fordist workers into its agenda: Black housekeepers (mostly women), informal workers, street vendors, small-scale farmers, indigenous workers and so on. Also, FOB has been concerned with the broader impacts in countries at the periphery of the global capitalism; class conciliation during the Workers’ Party government that led to impacts in our bio-diversities, indigenous livelihoods, and an increase in economic dependency on the international bourgeoisie across commodity chains. Still, historical political practices beyond labor (not wage) exploitation are also part of FOB’s political repertoires, such as self-management, mutualism, and mutual aid (FOB 2019).