In February 2018, members of the University and College Union (UCU) at more than sixty UK universities went on strike. They braved the snow, the cold, and lost pay for fourteen days to prevent their pensions plan, the University Superannuation Scheme (USS), moving from a defined benefits scheme to a defined contributions scheme – a change that would have meant £240,000 lost for the average academic. They succeeded. The proposed change was shelved, and its in place the universities and UCU agreed to form a joint working group to explore alternative ways to protect the USS.

Now UK universities face another prolonged strike, this time eight days long and beginning on 25 November. Part of it is again about pensions. The joint working group has failed to agree on the valuation of the fund, and so contributions must rise, future benefits fall. The strike is then again about the future of the USS. Unlike the last strike, this one also includes a number of other issues. One is pay. The UCU wants 3%, as part of a long-term plan to claw back some of the 20.8% drop in real wages for UCU members in the past decade. Other unions representing other workers on campus – Unison, Unite, and so on – have put in their own claims for an above-inflation rise in pay. In this, university workers are simply expressing the same anger with wage stagnation or even wage decline felt by millions of public- and private-sector workers across the UK.

But there is more to the strike this time than easily quantifiable demands (as with pay) or murky actuarial calculations (as with pensions). Just as myself and many other commentators noted at the time, the February 2018 strike may have ostensibly been about pensions, and that crucial gap between defined benefit and defined contribution systems, but for many of those on the picket line it became about a whole raft of wider issues: the increasing burden of work for permanent staff, the insecurity and low pay of academics on short-term or zero-hour contracts, the whole way in which universities have become businesses, concerned more with multi-million-pound building programmes than with the physical, mental and financial health of the people who keep them running. An entire literature of protest grew up around the picket lines, on social media, wherever UCU members congregated during and after the strike. It was this feeling that allowed Jo Grady, an employment lecturer who became a minor twitter celebrity among UCU members during the strike, to successfully run for the general secretaryship of the union against two more established candidates, each with an established faction behind them.

This time, these wider issues have been baked in to the strike itself. The issue of casualisation – the remarkable growth in academia of temporary contracts, measured by the year, the semester, even the hour – is now a central demand of the strike. So are wider questions of equality. The gender pay gap, and an identifiable gap between white and BAME academics, are also at stake. And then there is the issue that ties many of these other issues together: workload. Close readers of the press will remember the suicide of one tutor at Cardiff University after he simply couldn’t cope anymore with the stress of an ever-increasing range of teaching, admin and research jobs. Others will note survey after survey of university staff, all with the same consistent finding: that academic and academic support workers, along with other colleagues on campus, find that the university expects more and more of them without any compensation in pay.

These other issues complicate the strike. What, many people have and will ask, would the UCU settle for when it comes to casualisation? What meaningful redress of gender and ethnic imbalances in pay and hiring would settle the dispute? What kind of meaningful national agreement on workload – or indeed on any of these issues – could be reached, in a sector where conditions vary so wildly from university to university? These questions have no easy answer. These are issues where bargaining, such as there has been, is normally left to individual branches, individual institutions, even individual schools, faculties or departments.

The important thing to recognise here is that they have been nestled alongside pay and pensions precisely because of, or in spite of, the fact that they are local issues – but local issues that it seems impossible to resolve at a local level. At worst, it might be said, the UCU has placed casualisation, equality issues and workload problems on a national stage in order to raise consciousness about them, and to give the maximum number of UCU members the maximum possible reason to get to the picket lines and make themselves heard by university managers. After all, what good is a pension for an hourly paid teacher if they have no way of knowing whether they’ll have work next year – or even next semester, or next month?

By putting these other questions on the agenda they are not only telling university managers about the problems that need urgent resolution. They are reassuring UCU members in less fortunate circumstances that their needs are being met, that their demands are not just the stuff of the occasional conference resolution or campaign in between the “real” issues of full-timers’ pay and pensions. This, then, is a strike on many axes. The many demands made may cause confusion at times among UCU members, students and the general public: but what they are also doing is illustrating the multiple crises that academic staff now face.

What remains to be seen is whether the universities can be convinced by eight days of action to think again. Even more than in the last strike, virtually all Vice Chancellors have so far been loath to say anything in public that suggests they might be willing to change direction – whether to think again about the valuation of the USS, to accede to real wage rises for academic staff, or to take real action on the growth of casualisation, persistent gender and racial imbalances, and spiralling workload pressures. (Though, as a unique exception, the VC of the University of Essex has come out publicly to support an increase in employer contributions to the USS). There is always the problem that poorer and debt-ridden universities will resist any national agreement that puts more pressure on their bottom line; and that wealthier universities are unwilling to agree to anything that, as they see it, could leave them liable for the pension liabilities and other consequences that might occur if struggling universities go broke. The solidity of the strike, the numbers of UCU members who join and maintain the picket line over the eight days, will surely decide whether enough Vice Chancellors do think again, and have a change of heart.

Then there are the students. Last time, as a whole, they proved remarkably sympathetic: many braved the snow alongside UCU members to show their support for those who teach and support them. Whether they will show the same support will also depend on whether UCU members can reach out to them, convince them that the system which causes so much grief to staff is the same one that charges them high tuition fees, and show that the interests of staff and students are in so many ways the same.

Finally, there is the climate in which this strike will take place. The actual climate will be bad enough – in the cold and rain, the uniform of the picket line will be heavy jackets, raincoats and umbrellas. The political climate will be trickier still. If the strike goes the full eight days, it will end barely a week before the date of the general election, where the votes of students may in many constituencies prove decisive. Will a large, national strike in election season work to the benefit of the strike? Could the strike, with the disruptions it will unavoidably cause, mean that some students even think again about supporting Labour, the party of the trade unions?

These are all questions that will only be resolved in the strike itself. In the meantime, we can only hope that university managers listen to numbers and the mass withdrawal of labour, if not to reason, and to the grievances that the UCU has conveniently listed for them. At least this time those demands are not latent, or in the background, but on the table. Regardless of how the strike goes, university managers can’t say they didn’t know, or weren’t told, of what is happening on their watch. 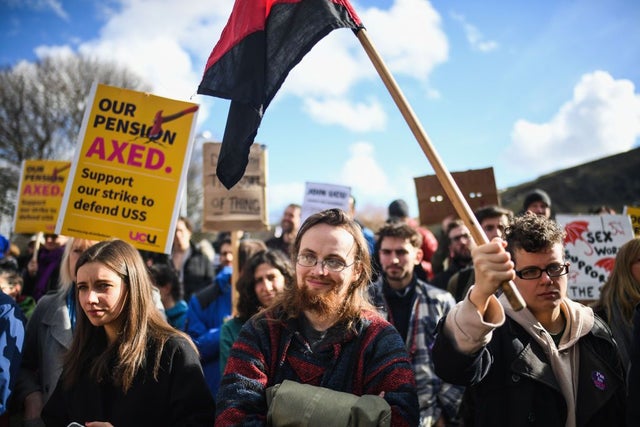